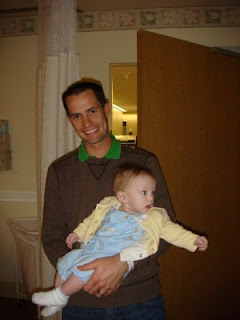 We had a good time visiting Danielle, Matt, and new baby Brielle in the hospital. She is such a beautiful little girl! Thanks for letting us visit.
By Keith at November 30, 2008 No comments:

We have been enjoying Microsoft's Live Search cashback. If you register for their free cashback program, when you search for things using live.com search, it gives you a 30% cashback link to eBay. If you follow that link, just about any Buy-It-Now purchase will give you 30% cashback (on top of the already discounted eBay price).

So we made some big purchases that we have been putting off. We bought gift cards and some expensive motorcycle gear (a new Arai XD3 helmet and a pair of Asterisk Cell knee braces). 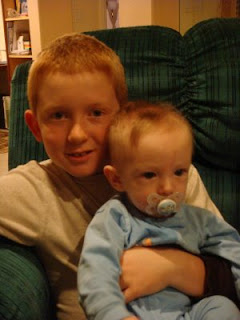 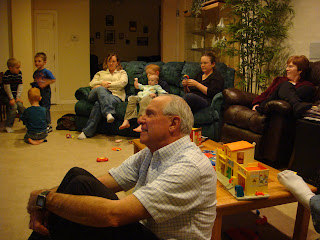 We had a great time visiting with Phil, Nicole and their kids and Grandma and Grandpa Knight this week. The kids played so well together (which is always a huge plus) and the adults visited and played several games.
By Keith at November 29, 2008 No comments: 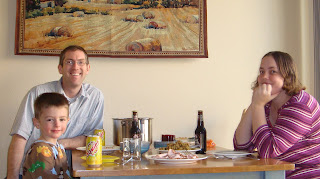 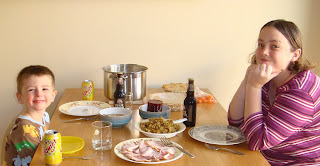 We enjoyed a delicious Thanksgiving dinner at home, featuring herb-roasted turkey, stuffing, homemade red mashed potatoes, homemade pumpkin pie, and an apple pie. It was nice to celebrate the holiday just by ourselves.
By Keith at November 28, 2008 No comments: 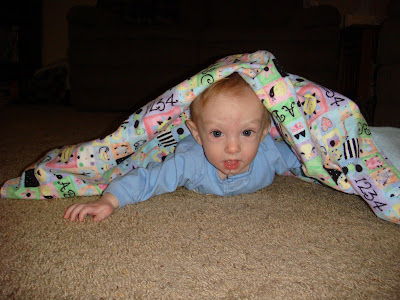 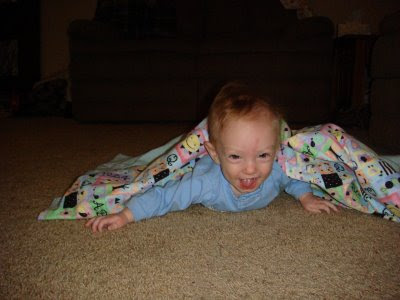 Email ThisBlogThis!Share to TwitterShare to FacebookShare to Pinterest
Labels: tucker 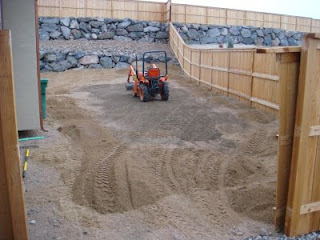 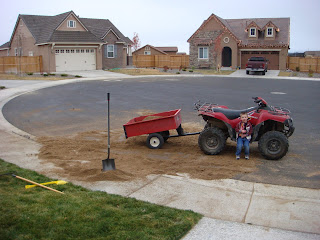 Carson and I moved another six cubic yards of decomposed granite into our backyard today. Luckily, we were nearly done before it started pouring rain.
By Keith at November 26, 2008 No comments: 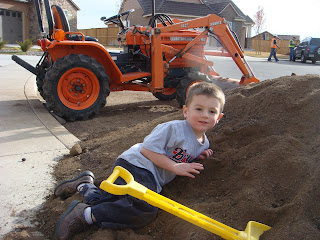 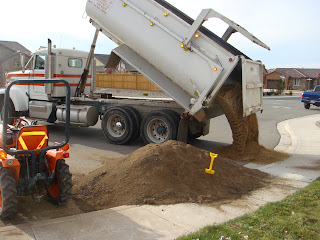 Our neighbor commented today, "you're the handiest computer guy I've ever seen."
Carson and I worked in the yard most of the day again. Grandpa Knight brought his tractor, allowing us to scale up our operation. We went from moving 1.5 cubic yards in a few hours to moving almost 7 in the same amount of time!
We switched suppliers from Rail City Garden to RT Donovan. RT Donovan has much better selection, service, and prices. They were able to deliver 7 cubic yards of material within a couple of hours. We had been picking up the material half a yard at a time, but it takes way too long.
Anyways, we made good progress...
By Angela at November 25, 2008 1 comment: 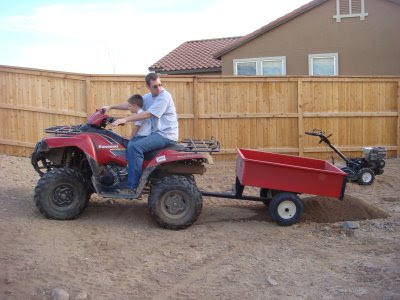 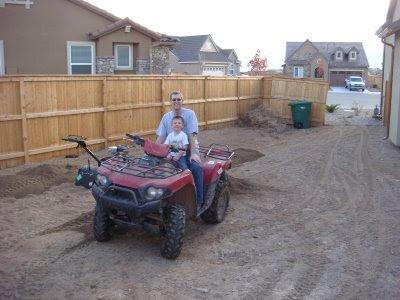 Carson and I spent the day landscaping our backyard. It took us a while to get setup, but we were able to get a lot done.
All of the shoveling was good exercise for, what is now, my extremely sore shoulder -- it still hasn't healed from my dirt-bike crash. Carson helped with the plastic beach shovel that Grandma Bea gave him.
Grandpa Gene's tiller and Grandpa Knight's ATV made it a pretty exciting day for Carson and a much more efficient and bearable day for me.
By Keith at November 24, 2008 No comments: 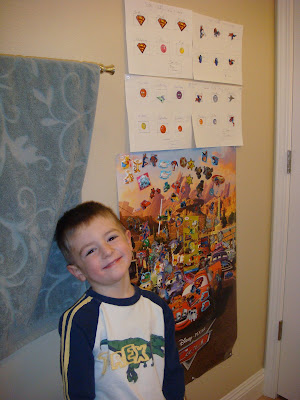 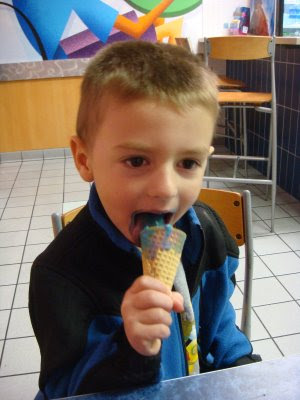 Potty Training is complete; Carson is now officially potty trainined!
So what worked? The biggest thing was getting advice from others. Initially we tried giving little snacks or treats each time that he used the bathroom. This failed miserably. Then we asked around. It was suggested that we make the bathroom 'his place'. We got big Pixar 'Cars' movie posters (which Carson loves) and hung them on the wall in each bathroom he used. We bought every kind of sticker that he might like. Each time he sat on the toilet, he could pick out a sticker and put it on the poster. He loved it.
He was only required to sit on the toilet for the sticker; he didn't have to actually 'go'. This helped motivate him -- no pressure.
There is this really expensive kids hand soap that foams up. Angela found a generic equivalent, and put a big Thomas the Train sticker on it to make it more fun.
To begin with, we told him to go every 45 minutes. We slowly expanded this until he started telling us that he needed to go.
After he seemed to have it down pretty well, we started weekly 'no-accident' charts. He got a sticker for each accident-free day. Once he had 6 stickers on the chart, he would get a prize the next day. First was a toy train, then a toy tractor, then the last two weeks the family went to ice-cream. These were a huge motivation for him.
It's been a month of accident-free days, so we are officially calling him Potty Trained.
By Keith at November 23, 2008 1 comment:

Combining a potty-training three year old and a four month old makes it tough for a family to get out much. You always have to be within minutes of the nearest bathroom and have to accept that there will be a baby scream at the top of his lungs in the process (and people disturbed by the screaming). Our blog entries of the last month illustrate this well -- nearly everything has been from home.

While the lack of sleep (especially for Angela) and lack of 'getting out' can seem tough at times; it really isn't that bad.

Carson and I were at Long's a couple of nights ago. The cashier was venting concern and frustration about the possibility of the store shutting down. Hundreds of thousands of Americans have lost their jobs in the last few months. Millions are losing their homes.

Even with all of that going on, the problems we are facing in our nation are minimal compared to the suffering throughout the world.

So we are greatful for our simple and easy, 'tough times'.
By Keith at November 23, 2008 No comments:

Carson helped me fix up the car today. We replaced the radiator, spark plugs, front rotors and brake pads. He's a pretty good mechanic. He even climbed underneath the car with me while we disconnected the radiator!
By Keith at November 21, 2008 No comments: 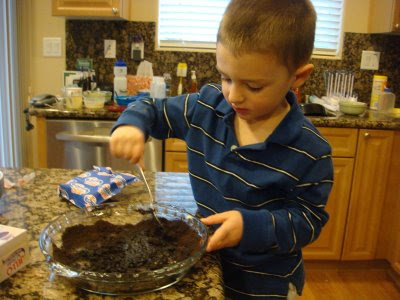 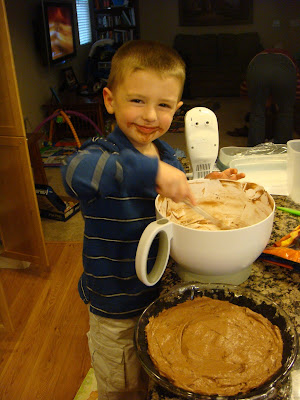 Carson has inherited a sweet tooth from both his Mom and Dad. So he loved his opportunity to make a yummy dessert for dinner at Grandma and Grandpa Knight's house today. He did a great job.
By Keith at November 09, 2008 No comments: 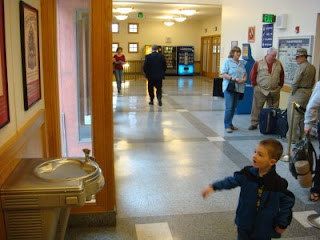 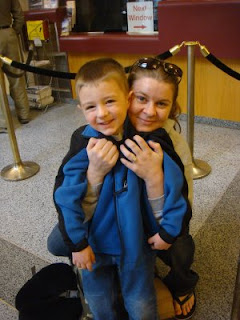 How can kids be so tiring?!? The combination of a 3 1/2 year old and a four month old can really drain you. Michelle was kind enough to visit us for a week and a half and help with the kids.
Carson had a great time with his buddy, Michelle -- bringing him to tears as he had so say goodbye at the train station (although, he did love the train station until he realized that Michelle was leaving).
By Keith at November 08, 2008 No comments:

Mom and the boys Mom and the boys.......I know, I look a little tired. That's what happens with a three-month-old! 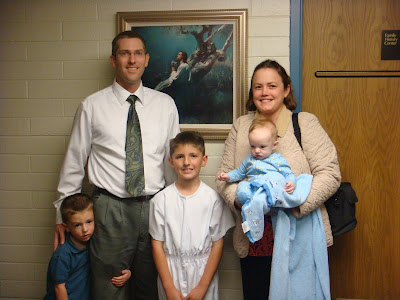 Grant invited us to his baptism, which was held in Sparks to be closer to both sets of his grandparents.

To help Carson understand what was going on, we spent the last few weeks in Family Home Evening discussing baptism and why Jesus taught us to be baptized.

Carson was really excited to witness Grant's baptism. It was a spiritual experience for all of us.
By Keith at November 01, 2008 No comments: