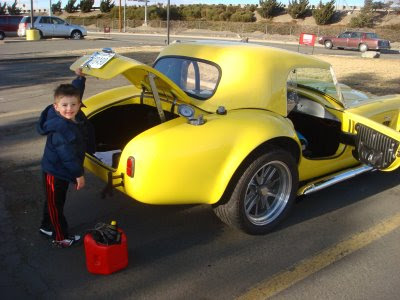 Apparently, the Cobra has a few kinks to work out -- some of which randomly come and go.
For starters, the gas gauge doesn't work all that well. Returning from the DMV, the car stuttered, then died at one of the busiest intersections in Sparks. I got out and started to push. Not one person offered to help. As the car crawled forward, cars whirred by. I had to wait for a break in traffic to try to push the car, all by myself, to the nearest spot where it could be left.
Carson and I finally parked and began our journey, on foot, to the nearest gas station where we paid way too much for a gas can. I treated Carson to a soda and we returned to the car.
The car started right up and we went to another nearby gas station. After filling-up, the car didn't start. We were stranded -- again. The station attendant was a huge help in finding some jumper cables to help jump the car. The battery was weak, but the carburetor appears to be the problem; it will need some adjustment.
On three separate occasions, the car hasn't started now (which is nearly as many times as we have driven it).
So, Carson and I have our new project car!
By Keith at February 21, 2009