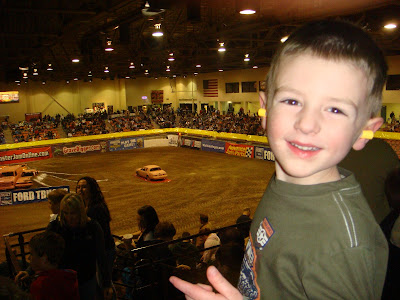 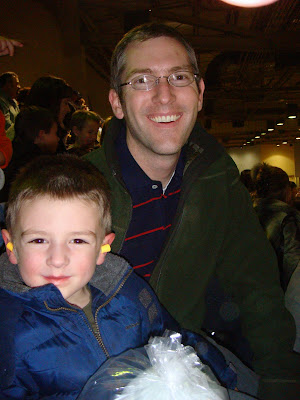 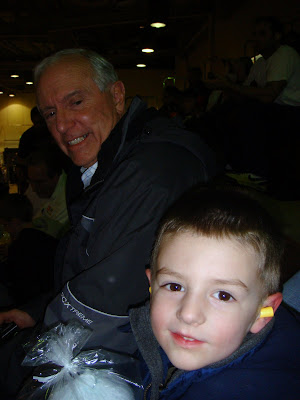 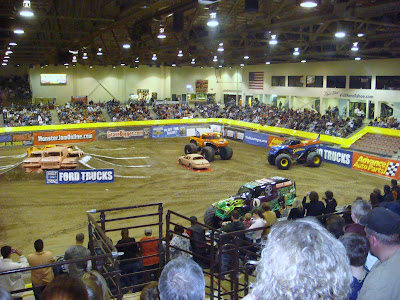 We won two free tickets to Monster Jam from Boulevard Pizza. So my Dad, Carson and I went. It was a blast.
Well, actually, at first it was a little annoying. Parking was $7, which my Dad was nice enough to pay. Then when the show started, it was SOOO loud. Carson and I were covering our ears and were very uncomfortable. After wandering around for a while, I found someone selling ear-plugs. They helped a ton! I felt a lot better knowing I wasn't deafening my son.
Carson had received a toy monster truck, El Toro Loco, for Christmas from his Great Aunt Brenda; so Carson was really excited while El Toro Loco was performing.
Those trucks are really amazing. They demolished a bunch of cars, landed huge jumps and did wheelies and other stunts. Pretty impressive.
In between the main events, they had some side events. There were fun ATV races. A demonstration of small remote controlled cars, which amazingly did the same jumps as the huge monster trucks. They also has a huge transformer show. Two cars drove out, then transformed into huge creatures which then fought. Luckily, the 'good' transformer saved the city of Reno from the 'bad' transformer.
It was a fun night. Thanks Boulevard Pizza and thanks for coming Dad.
By Keith at March 14, 2009