We live in Marietta, Georgia 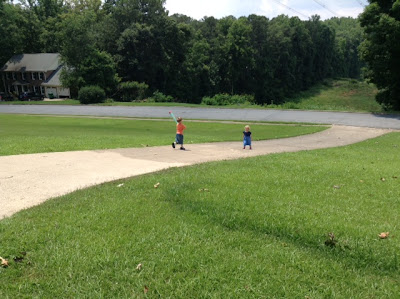 We are here! Here are some pictures of the front of our house and neighborhood. We have a really long driveway! 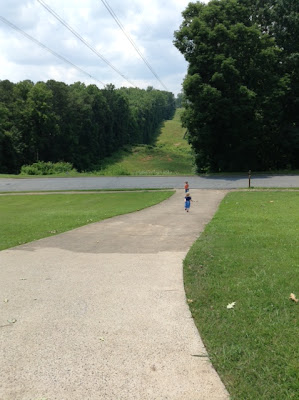 There is an open field next to our house because of the electrical towers, it's nice to see all the birds flying to and from their nests. 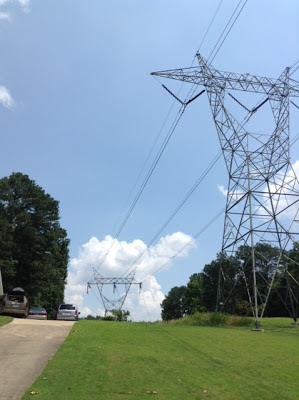 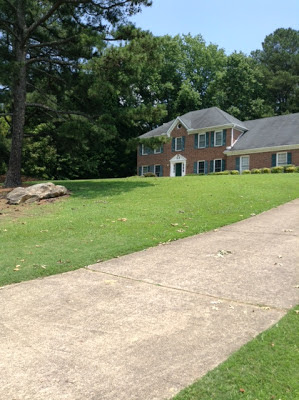 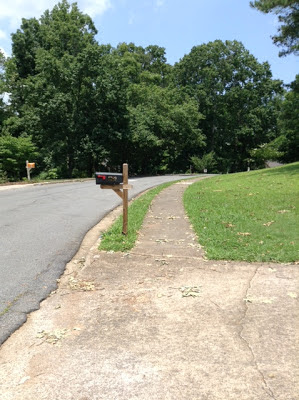 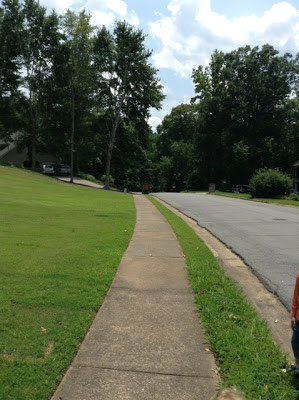 The neighborhood is very green, trees everywhere and the houses are old-fashioned, two-story houses. It's beautiful. 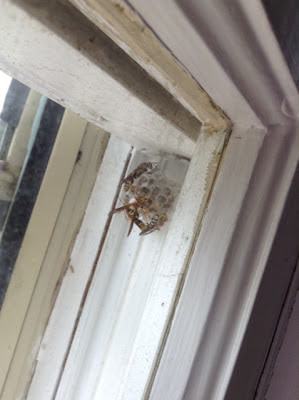 We found these in one of our windows - they're gone now! 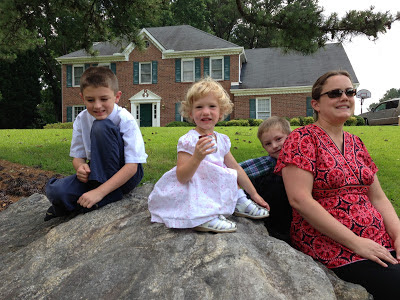 Us in our front yard. 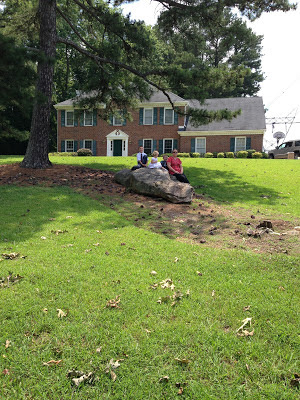 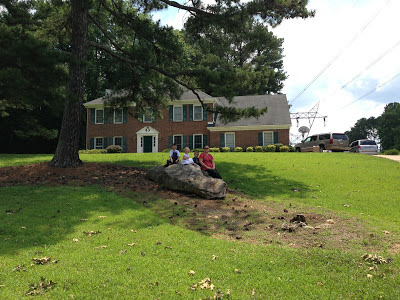 June 10th - we fly to Dallas, then get on another plane and fly to Atlanta, GA. The kids behaved very well. It was a pain to carry all our bags, plus two carseats through the airport and on to the rental car building once we got to Atlanta.
Our vehicles got there before we did, but we kept our rental minivan for the week.
June 11th - we leave the hotel and go to the house, the movers are there and it is SUPER humid and hot! The movers have to push all our boxes, beds, couches, etc. up our long uphill driveway. They unloaded everything into the house, but they left all the unpacking of boxes to us, yay! Still, it was very nice to have the movers do most of the dirty work.
We find many problems with the house upon moving in: the AC doesn't seem to work, as it is really hot outside AND inside! The house is generally grimy, and overall it just doesn't look or feel like it has been maintained well at all over the years. Lots of plumbing, wiring, and cleanliness issues.
We decide to go back and stay in the hotel, partly because of these issues, but also because the movers did not unpack our boxes, like we thought they would, so we weren't prepared to sleep in the house yet.
June 12th - it's still very hot and humid, the movers are gone, but we are unpacking and cleaning up the house and it is so hot inside! My face is dripping with sweat as I work. As I was up in Carson's room, I could hear the birds chirping easily, even though the windows were supposed to be all closed. I look under the blinds and see that one window is open at the top (they are the old-fashioned type of window) so I pushed it up to close it, but there was something in the way. There was a mud glop, some kind of nest sitting on top of the inside of his window! Later we found another mud glop nest on the other side of that same window, probably hornet or mud-dobber nests. Can't live here! Went to the hotel for the night.
June 13th - we go back to the house and the AC really isn't working, so we call upon the landlord to fix it, or else we aren't moving in! So he sets something up with a repairman, but he won't come until the next day. There are a few backed up toilets, and faucets that dribble, light fixtures coming out of the walls and ceilings, ceiling fans wobbling when turned on the highest setting. Just lots of problems that come from not taking care of your house! It's too hot to sleep in the house, so we go back to the hotel until Saturday.
June 14th - the kids and I go to Chick-fil-a while Keith has to stay at the house while the fridge, washer and dryer are delivered. Chick-fil-a is a great restaurant! I like how they hire all ages of people to work there and their menu has salads, and real chicken nuggets, real lemonade, chicken salad sandwiches, etc. They have tables outside with umbrellas and a playplace - love it. We also went to Target a few times for their mega air-conditioning! What a relief! After being here now for a week and a half, I can see now that the humidity is here to stay, but the tempurature was really hot those first few days, it's more mild now. So we got our appliances, but they couldn't install the dryer because the tubing for the vent wasn't up to code. In other words, everything is way old in this house and nothing has ever been replaced, so we're running into all these roadblocks now. Keith took care of that though; he went to Home Deopot and got some new tubing and installed it all himself! We really like our Maytag washer/dryer and Samsung fridge.
We moved in and started sleeping here on Saturday, June 15th, and since then there have been lots of thunderstorms. It just dumps buckets of rain and frequent flashes of lightening and loud cracks of thunder during these storms! Our backyard becomes a small lake while the huge drops fall for about 40 minutes, but because of the big hill we're on, it all runs down to the street, or absorbs by the next day. There aren't as many parks here as in Sparks, we found two somewhat nearby. We'll have to look for a pool or some fountains sometime so we can cool off!
We will never really have to go into Atlanta for any reason other than going to the Coke museum, Atlanta aquarium, and other must-see spots i.e. Legoland.
BUT - despite all these problems -
we still want to live here because:
- this neighborhood is beautiful
- this neighborhood is just a few minutes drive to Keith's office
- Mt. Bethel elementary is just down the street and is a very good school - Carson and Tucker will be going in August and we look forward to the experiences they'll have there
- the neighbors are friendly and welcoming
- we are just a minute away from grocery, clothes shopping and possibly doctors and dentist's offices
Those are the reasons I can think of right now, but the bottom line is, we are glad to be here and as each day goes by, we make this house a little bit more comfortable. But today I just found a huge black bumblebee in the living room! Ok, never mind that, things are probably going to keep coming up, but we'll keep dealing with them, as long as the house is still standing!