Carson was assigned to create a brochure on Greece, with very specific content to be included.  So we decided to make it in PowerPoint, which Carson learned to use pretty quickly.  We had the entire thing complete, when his teacher told him that he could not use a computer for the entire thing (which I don't get at all -- isn't that how every brochure in the world is made these days?).  In any case, Carson printed our his brochure and cut pieces out and taped them on paper and wrote in the text (which he had typed by himself).

Then Carson had a test on governments from the same teacher.  I had worked extensively with Carson to ensure he understood the material well, which he did.  Nearly everyone in his third grade class failed (including him).  Angela and I looked at the test and it took us, adults who understood the material well, quite a while to understand the questions.  Not too impressive for a third grade test.

But in any case, we think the brochure turned out great. 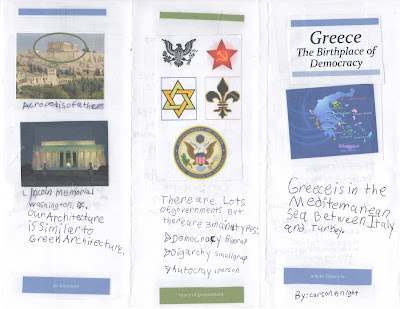 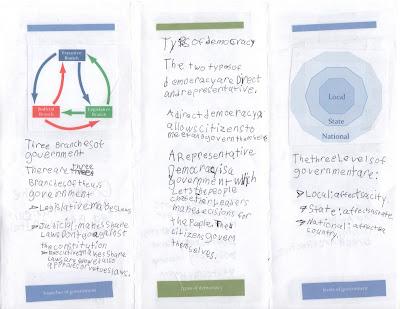