These last few months, I've been working on our robot for my lego robotics team, Mindstorm Masters, in FLL (First Lego League). Our robot is tasked to move around a field with different missions on it, and complete those missions to earn points in a certain amount of time.

As I said in an earlier post, we competed in Nevada, and earned the Breakthrough award, as well as being the only team in Nevada to move onto Worlds.

Our Worlds competition was on June 24th to June 27th. It was originally going to be based in Greece, but it was moved to a virtual event. We ran 3 official runs, which turned out to be a high score of 245. In practice runs we could get up to 285 points, and some of the highest scoring teams could score up to 595 points, which is near the maximum number of points you could get.

In the award ceremony today, they announced that we got 4th place in the entire world for our robot design. You can view the awards and scores here. (scroll down a bit to the robot design award or see the image below)

You can also watch the part of the ceremony where our award was announced here. (it will already be at the correct time in the video) 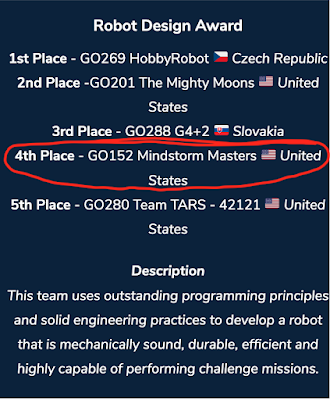