After some significant work, the car is running again.  We replaced the fuel pump, which we believe to be the primary cause of the issue.  The issue has been intermittent, so we aren't positive it was the issue.  The fuel pump is inside of the fuel tank, so we had to drain 24 gallons of gas out of the car, disconnect lots of hoses, then remove the fuel tank.  East-coast rain led to some seriously rusted parts which significantly complicated the repair.  We ended up cutting multiple parts off of the car to get the tank off, then replacing those parts.

Tucker helped replace the idle air control / throttle body for good measure -- we found a returned performance aftermarket one on Amazon for a good price.

I asked Tucker to put on some clothes that can get dirty -- these were what he chose: 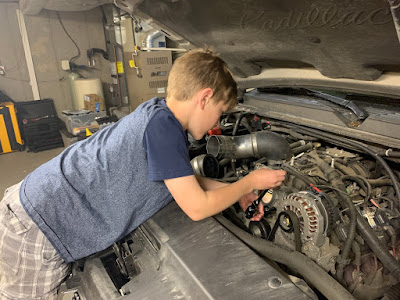 Within minutes of finishing the repairs, we nervously took the car out of town, passing the spot it broke down before.  So far, so good...
By Keith at June 28, 2019