There's a homeschool group that puts together holiday parties throughout the year, and we recently participated in the Thanksgiving party that took place at our church building.
The party was structured like this: kids rotate through 7 stations in the gym, spending about 10 minutes at each one. I was asked (the night before) to be in charge of the "History of Thanksgiving" station. So I went to the library and checked out some kids' books on the history of Thanksgiving so I would have some pictures of ships and pilgrims. Then I found some other visual aides (one of them being my pioneer costume, which worked well, cause the bonnet is really droopy so it looked similar to a pilgrim hat). 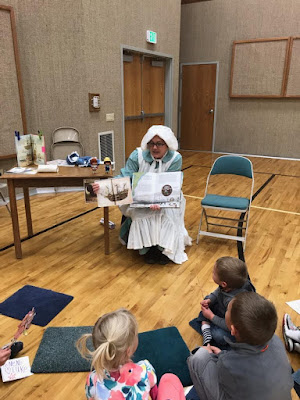 It turned out great. There were different age groups, so I had to adjust my presentations accordingly. You can see I am holding a tiny globe. I always started out pointing to the United States and then going across the ocean to England and Holland to show where the pilgrims came from. If you look closely, you can see Strawberry Shortcake and Huckleberry Pie on the edge of the table. I used them when I described the different roles of men and women while they built up their new colony. 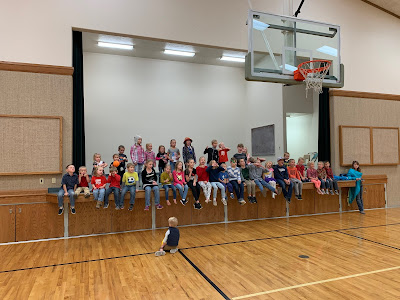