The new interest in slime...

Hi, its me, Savannah! I just wanted to make a blog post of what has been going on in my life, and I have actually found a new interest in... SLIME!! I like slime because it helps me keep focused and also lets me have something to have in my hands during church, at home, friends houses, away from home, etc.

One of my favorite slime types is butter slime. the consistency is like a dough but does not stick to your hands and is VERY thick. How I like to make it is make my glossy slime (recipe below) and add cornstarch to it until if forms the slime. But I don't make it that often because I am not allowed to use my Mom's cornstarch. (haha) But the main slime I GET to make is the glossy slime. All it takes is, Tide liquid detergent, and Elmers white glue! It's that simple!

I try to find the easiest, funnest ways to make slime, that are just as good! Scanning through all my slime recipes I realized that I don't have a recipe for clear slime!! I have tried over, and over again and all my attempted clear slime recipes turned out sticky or hard. :(   So I am still researching to find a good clear slime recipe... But so far I know, butter slime, glossy slime, thick'n glossy slime, fluffy slime, crunchy slime, buttercream slime, glitter slime, and I have almost gotten color changing slime the easy way! 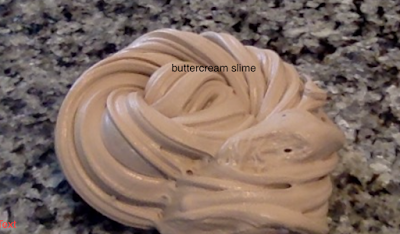