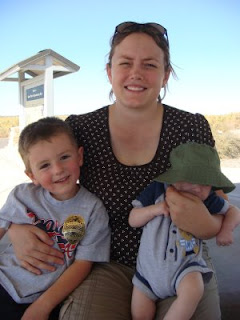 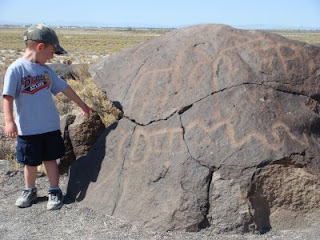 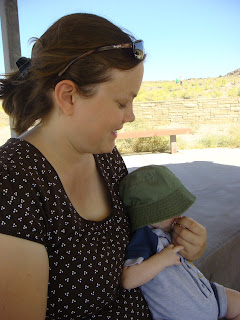 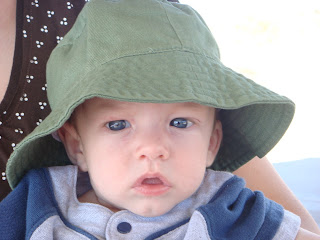 As I returned home from work about a week ago, I found the 'Family Pulse' magazine lying on our driveway. It wasn't half-bad. I actually read a lot of it (which means it must be pretty good, I rarely read freebie magazines and papers).

It had an article about petroglyphs in Nevada, highlighting Grimes Point Archaeological Area (a National Recreation Trail [whatever that really means]).

So Saturday morning as we were trying to decide what to do, we decided to check the site out.

Our hour long drive brought us to the deserted site, just 100 yards off of Highway US50. It was really well designed, with a gazebo providing much needed shade, petroglyph themed seating, picnic benches, and restrooms.

Just in the short time that we were there, half-a-dozen cars from various western states stopped for the bathroom. Some people even took the short natural trail to the petroglyphs. If it weren't for that bathroom, the place would be largely unappreciated.

The trail is in excellent condition -- Tucker's stroller did just fine. While the trail would only take 10 minutes to walk (with kids), the self-guided tour signs give you the opportunity to stop and admire the history of the area. The entire area had been hundreds of feet underwater at one point, which explains the weird (and fairly ugly) terrain of the valley. The petroglyphs are believed to be thousands of years old, which leaves their purposes and inteprations largely a mistery.
Afterwords, Carson and I were able to have a good talk about what life must have been like at that time and how blessed we are. After naming many of the comforts and possessions that we have, I asked him, "What did the Indians have?"
His response: "Rocks." It made me laugh.
The excursions that we have being going on have really opened up a lot of 'teaching moments' with Carson and been fun for our family.
By Keith at September 28, 2008